Baking powder or baking soda in vegan baking? using one or the other? Or both?

Many pastries are full of hot air, but when baking this actually is a good thing, because airy or light pastry has a lot of flavour in it. Air serves as a lightning-fast flavour vehicle to transport the aromas from your mouth to your nose. These aromas accumulate in the air bubbles and are released as soon as you take a bite of your cake, cookie or pie.

All air in cakes is made up of only three types of gas. The air we breathe, water vapor and carbon dioxide. Ordinary’ air is added to your batter mechanically, by whisking, stirring or mixing. Water vapor is created naturally during baking, as soon as the water in bread or pastries begins to boil in the oven. Carbon dioxide is created with the help of yeast or sourdough and by using chemical leavening agents. It is the latter which this article is about. For all types of gas, it wants to escape during baking. Therefore, it presses against its surroundings, allowing pastries (and also bread) to increase in volume.

As mentioned, air in vegan pastries is indispensable for the right taste and texture. As a pastry chef, you have several chemical raising agents at your disposal to create carbon dioxide in your batter and during vegan baking. The basis of most of these agents is baking soda, also known as sodium bicarbonate. This substance – which despite its name – is not dangerous for human consumption and begins to produce carbon dioxide gas as soon as it comes into contact with an acid and water. So baking soda only works if there is an acidic ingredient in your batter such as a yogurt culture, vinegar or lemon juice. But cocoa powder, molasses (in brown sugar) or invert sugar (in soft sugar) can also contain acids and therefore activate baking soda in a batter.

The taste of baking soda in vegan baking

Baking soda, in addition to being an efficient raising agent, is also one of the few alkaline ingredients in the kitchen. Alkaline is the opposite of acidic. We all know the taste of acid, the taste of an alkaline ingredient is not as well known. This is logical, because it tastes like soap. So you want as little of it as possible in your pastry. Why would you still use baking soda? Because the bad taste disappears during baking. This is because the baking soda reacts with the acid in a batter, neutralizing it (no longer alkaline) while producing carbon dioxide. Therefore, it is important to use the right combination of baking soda and acid in your batter. Too much baking soda relative to the acid means that not all the soda is neutralized and you are left with a nasty chemical soap taste. Too little baking soda relative to the amount of acid is less of a problem. At least you can be sure that all the baking soda is neutralized. The little acid that remains may even be desirable for a fresh taste to the pastry.

Acidity and gluten in vegan baking

Acidity is the unit we use to express how acidic or alkaline something is. It ranges from 1 (very acidic) to 14 (very alkaline). Right in the middle is number 7, which means neutral. If you mix flour, sugar and vegan butter you get a neutral cookie dough or cake batter. As soon as you stir in applesauce or a yogurt culture, the batter becomes more acidic and drops below the 7, for example to 4. This not only affects the color of the pastry, as we have just seen, but also affects the binding power of the dough. In fact, acidity influences the formation of a gluten network**. The more acidic the batter, the worse the network. In pastry you don’t want a strongly developed gluten network (but you do want one in bread), but little or no binding is not desirable either. Too little gluten network results in your cookies running out on the sheet or even in a cake collapsing. For this reason, pastry chefs use a little vinegar to make firm dough that has trouble rolling out more pliable. Baking soda, conversely, can be used to make firm dough that spreads to much, due to a large amount of acidic ingredients (such as cocoa powder).

Baking powder is a combination of baking soda and a soluble acid in powder form. Usually some starch is added as an anti-lumping agent. Thus, this combo allows you to make any batter rise, regardless of the presence of acidic ingredients. Like baking soda, baking powder will only start to develop carbon dioxide once moisture is added. Then the acid can dissolve and react with the baking soda. Most baking powders contain acids that dissolve at room temperature and acids that only dissolve at a higher temperature in the oven. This is called double acting baking powder. The first gas is released during mixing of the batter and a more gas is released during baking in the oven. Because of this property, you can add baking powder to a cookie or cake dough that you want to store for several days. This is in contrast to dough or batter with baking soda. That has to be processed immediately in a mold and baked off. Otherwise, the carbon dioxide will disappear and your pastry will not rise.

Baking powder is actually an ideal product for adding air to pastries. Why should you still use baking soda? There are several reasons. The most important one is the taste. Pastries made with good use of baking soda usually taste better than the same pastries made with baking powder. This, of course, has to do with that Maillard reaction, which makes almost everything tastier in our kitchen. Also, the color of the pastry becomes deeper brown because of the baking powder. Furthermore, you need much less of baking soda. For one part baking soda, you need three parts baking powder. The disadvantage of baking soda is that you cannot preserve the dough or batter. Because the soda immediately begins to fizz once added to an acidic batter. The rise is therefore immediately explosive. You can also take advantage of that.

Combination of baking soda and baking powder when baking

Some recipes use a combination of baking powder and baking soda. Usually because there are many acidic ingredients in the batter. The acidic ingredients will neutralize the baking soda and stop the leavening. Next, the baking powder can provide an extra rise because it has its own acid that only dissolves and reacts at higher temperatures (two-stage baking powder). In addition, you can use baking powder to correct the acidity of a batter so that you can reduce the sprouting of acidic dough or improve the coloring of an acidic batter. Plenty of reasons to keep both powders in your kitchen cupboard.

At the end of this page you will find a muffin recipe where a combination of baking soda and baking powder is used. In this case, it is to neutralize the acid from the applesauce. This keeps the acidity of the batter fairly neutral so the muffins will brown nicely in the oven. Without the addition of baking soda, they would be a lot paler. For the rising of the dough, the baking soda is not necessary because the baking powder produces enough carbon dioxide.

But first explanation of the muffins you see below. Here we have done some tests with a basic muffin batter consisting of 300 grams of flour, 180 grams of sugar, 180 ml of vegetable milk and 180 ml of oil. Added to this batter:

As you can see, the difference in baking results is very substantial. Muffin number 1 is the most risen. The volume is the largest and the crumb of the muffin is nice and airy. Right from the start of the baking process, there is a big rise. The whole mass lifts up due to the carbon dioxide released from the baking powder. Only later does an additional rise develop due to the baking powder which also causes a bulge in the top of the muffin. There is also a big difference in color. With the addition of baking soda, the acidity increases and the pastry turns brown more easily.

With number 2, the leavening is a little less. The crumb is a bit more compact and also the color a lot lighter. The baking powder clearly causes air to develop in the pastry but cannot match the strength of the baking soda in muffin number 1.

Number 3 has the same color as number 1 but is just a little smaller in size. The size is similar to No. 2 but the color is quite different. A muffin batter with baking soda has a higher acidity level and therefore bakes off more brown in the oven.

Number 4 has not risen at all. Not surprising since no raising agent was added to this batter. The result is a very compact and unrisen dough. Air in pastry also speeds up the baking process because air conducts heat better.

Join our Masterclass Vegan Pastry. With over 30 recipes and 20 hands-on videos, we’ll explain exactly how you can improve your plant-based baking results. Many people have gone before you! You can register via this link!

In the kitchen, the Maillard reactions make our food more appealing. During cooking and baking, all kinds of irresistible smells and flavors emerge, making us eager to savor them. Tofu and potatoes, for example, contain sugars and amino acids that react with each other during baking under the influence of heat and time to form hundreds of new aromas, colors and flavors.

Without sugars and amino acids, no Maillard reactions. It’s that simple. But more is needed. First and foremost: heat. The more heat, the faster the reaction. But not only temperature and time play a role, also the composition of a dish determines the course of the Maillard reactions. Below we will discuss the buttons you can use to influence the reactions.

** Gluten Network
The proteins gliadin and glutenin are found in wheat flour (and related varieties such as rye, spelt and barley). When combined with water and movement (kneading, stirring or mixing), these proteins form a sturdy network called the gluten. The network of proteins holds air in bread dough and provides firmness in pastries. 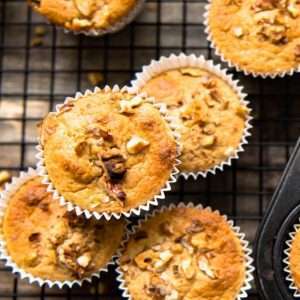 Keyword english recipes
Tried this recipe?Let us know how it was!
Scroll to Top

Don't miss out on these Delicious & healthy recipes