Have you ever heard about seitan? Or have you ever tasted it? And are you wondering what it is exactly, what you can do with it and how you can make it yourself? Then read on, because the Vegan Academy will tell you all about it on this page. And definitely check out the recipe and the video in this article.

Seitan is around for over 1000 years and is thought to have originated in China. Until the 1960s seitan was mainly consumed in China, Japan and other Asian countries. There it is popular in Buddhist cuisine. From the 1960s onwards, it became known and popular in the Western world in macrobiotic, vegetarian and vegan cuisine. Since the revival of vegan cuisine in this century and thanks to the speed at which food trends spread via social media, seitan is (once again) totally hot and happening. Thanks to this popularity, as well as to the ease of making seitan on the basis of gluten powder, we are currently seeing an enormous development in recipes and applications with seitan.

What is seitan made of?

Seitan is made from a dough consisting of the proteins from wheat grains, also known as gluten. Because seitan consists almost entirely of proteins, it has a high nutritional value, making it very suitable for a plant-based diet.

Wheat contains the proteins glutenin and gliadin. These proteins combined with moisture form a substance that we call gluten. Glutenin is a large and long protein that – when combined with water – can form bonds with itself and with the water. This process is reinforced when you knead the dough containing these proteins. The glutenin proteins form long, spiral-shaped molecule chains that give the dough elasticity. When you stretch the dough, the spirals tighten. When you let go, the spirals curl up again and the dough shrinks. The spherical molecules of the gliadin proteins provide cohesion in a dough. They give the glutenin chains a kind of ‘wheels’ to stretch out on. Because of its firm structure, seitan has a tasty bite that makes it very suitable for meat substitutes.

How is seitan made and how to you make it yourself?

Seitan was originally made by rinsing the starch out of a dough of wheat flour. Starch is water soluble, while gluten is not, making it possible to wash out the starch. As a result, when you “wash” a dough of wheat flour, only the wheat proteins remain. The starchy wash water is often called “spawn”. Because of the high starch content, you can use this liquid to make soups and sauces with. However, nowadays you can buy pure gluten powder, known as vital wheat gluten. You only have to mix this powder with water and knead it briefly to prepare a seitan dough. This makes making seitan a lot easier.

Because the flavour of gluten proteins is fairly neutral, seitan has very little flavour of its own. For that reason, you either add flavourings to the dough, or you cook the seitan in a very aromatic stock (both can be done, by the way: add flavourings and cook it in a tasteful stock). In this article, you will learn how to prepare seitan the fastest way possible, using wheat gluten. In the video below and in our recipe, we explain exactly how to do that. Seitan is easy to freeze or to preserve in jars. It is therefore handy if you make a large quantity when you do get started.

How to use seitan?

You can use seitan in various ways in your food. Basically you can add it wherever a recipe calls for minced meat. Below we give you some examples where we find it really nice to use seitan. And whatever you do, be sure to always use and never spill a drop of the stock that the seitan was cooked in, either when it’s homemade seitan or store-bought.

-finely chopped or ground as a substitute for minced meat, e.g. in ragu bolognèse, on a vegan pizza, as a filling in vegan dumplings or somosas
-sliced into wafer-thin slices as a spread on bread, on a finger food platter or as a garnish in an Oriental soup, for example in a Pho
-sliced and fried like a steak. Or as a schnitzel with a layer of breadcrumbs around it.
-thinly sliced as a starter served with a tangy salsa, pesto or herby mayonnaise

This seitan recipe is part of the Masterclass Taste & Texture. In this course you’ll learn how to add new flavours and aromas to vegetables and other plant-based products. With this knowledge you will be able to take your vegan dishes to the next level. All the techniques and ideas are incorporated in 30+ clearly written and unique recipes. With demonstration videos, we show you exactly how it works. Behind the scenes you’ll also have two experienced vegan chefs at your disposal during your course. Check out the info video & course introduction to the Masterclass Taste & Texture by clicking.

Become a member of Vegan Academy & get all the extra’s

Become a member of Vegan Academy and get acces to our free recipes, to our free course on Vegan Snacks, get offers for discount on all of our courses and get the latest recipes in your inbox. Just sign up on the “login” button at the top of this page. 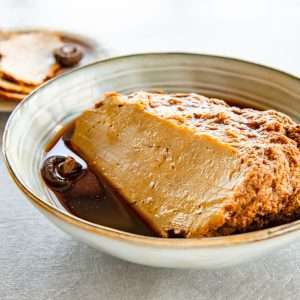 Wanna dive deeper into seitan’s origins? Check out what Wikipedia has to say. If you’ll like to learn more about seitan making via washing a wheat dough then this FB group might be interesting for you.

Don't miss out on these Delicious & healthy recipes